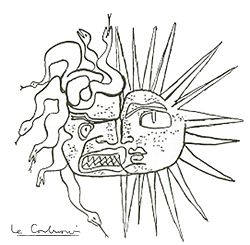 We're starting to chip away at a greater theme running throughout the design of E-1027. Eileen Gray wanted to create a very comfortable experience for the guests and owners of the home, and she did so by making things highly adaptable and interactive. The way she and Jean Badovici designed the windows, shutters and awnings of E-1027 to take advantage of the sun and wind are a vital part of this equation. More after the break.

As Corbu's drawing of the sun tells us, sometimes the sun is our friend, but other times the sun is our enemy. Instead of designing a single solution that lands somewhere in between these two sides of the dichotomy, Badovici and Gray created a dynamic series of windows and shutters that could be manipulated according to the weather. 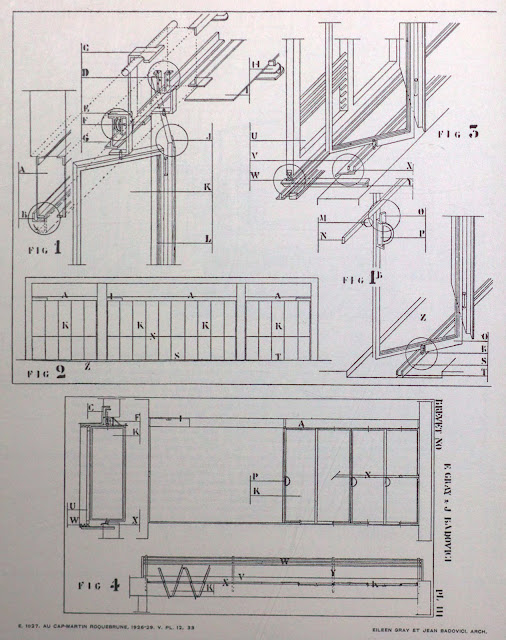 The windows in the bedrooms and on the main terrace are constructed like the image above. The windows fold onto themselves like an accordion, and are able to be pushed to one side in order to open up an entire vista and to let air and light in freely. This is done by suspending the windows on the top end from a steel channel, the connection being wheels that slide along the channel, allowing the windows to be pushed aside with relative ease. The bottom sides are fit into a notch that keeps the whole assembly aligned.

The second part of this assembly is the shutters that slide in front of the window and open up like an awning. In Architecture Vivante, Eileen Gray said "A problem we focused on, one that is often neglected, but none the less important, is that of the window shutters. A window without shutters is like an eye without eyelids. Over and over, attempts to solve this problem are met with the same result: insufficient ventilation when the shutters are closed. Our solution to this problem lets a generous amount of air ventilate the space while blocking the harsh sunlight." 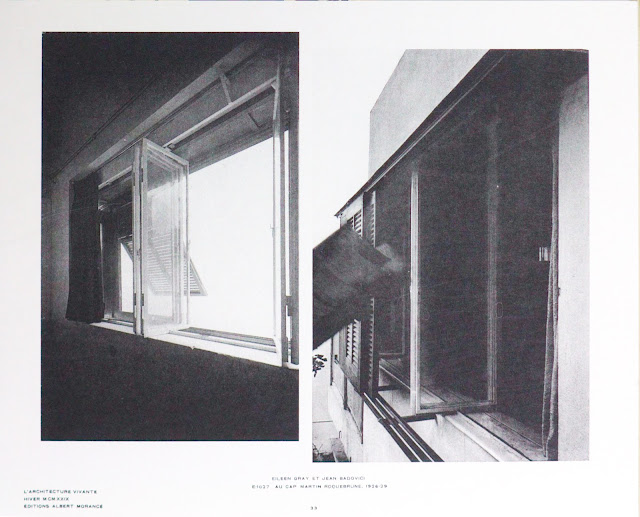 In this image we can see more clearly the railing system that the shutters slide along. You can see the large space between the window opening and the rails, which would allow for the ventilation that Eileen talks about. The way the shutters open (image to the left) would undoubtedly block the sun while letting in air as well.

Another method that the duo used to block out the sun is the large removable awning on the main terrace. When the sun calms down in the winter season (the lowest average temperature is 12 degrees celcius in February!), the awning can be taken down to let the sun penetrate deep into the home. Again the house begs for a human participant to manipulate it's many facets. The house becomes another limb of the human anatomy, an extension of the body. "A house is not a machine to live in. It is the shell of man, his extension, his release, his spiritual emanation. Not only its visual harmony but its entire organization, all the terms of the work, combine to render it human in the most profound sense" 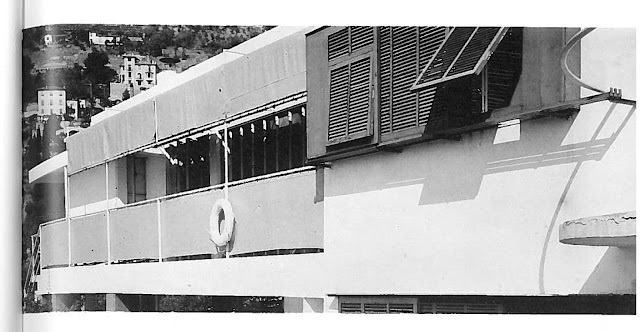